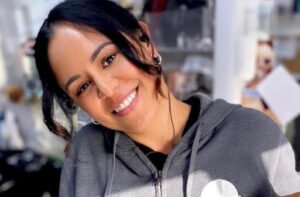 Any Makeup Artist can tell you that the world of prosthetics and special effects makeup is a whole world of its own. The level of skill, knowledge, talent and technique that the field requires is so extreme, that there are very few artists who can do it and even fewer who can do it effectively. Recently, Mirabella caught the unique and super exciting opportunity to catch up with one of the industry greats, Carly Marr. Fueled by a childhood passion for the arts, painting and storytelling, a creative career only seemed like the natural path for Carly. Particularly intrigued by other worldly creature designs she saw onscreen in Sci- Fi and Horror films such as The Aliens, The Evildead, Predator, and The Exorcist, Marr found her niche in the industry, and we couldn’t be happier she did. Her talented hands have created work for a multitude of amazing projects including but not limited to, Avatar 2, Avatar 3, the highly anticipated new Lord of the Rings series for Amazon, Ash Vs Evildead as well as home grown favorites Westside and Filthy Rich. Having an undeniable and overtly strong training background at one of Auckland’s leading academies, and then training as a hairdresser at the prestigious Servilles Academy, has allowed Carly to be more than prepared for an extensive career that has spanned multiple creative mediums including television, film, music, body painting, theatre and opera. Marr’s Celebrity client list reads like a regular who’s who, and includes but is not limited to: Antonia Prebble, Christina Milian, Hayley Holt, Ismael Cruz Cordova, Ivana Baquero, Jack Champion, Luanne Gordon, Mark Mitchinson, Melodie Robinson, Sir Lenny Henry, Stacey Morrison, Stephen McIvor, Te Kohe Tuhaka, Temuera Morrison and Theresa Healey.

MM: What is one of the biggest misconceptions when it comes to Special Effects Makeup?

CM: The biggest misconception about prosthetic makeup would have to be the amount of time it
takes to apply the makeup, along with costs involved and what an actor must go through in the process. Prosthetic makeup often involves many moving parts from design, casting, manufacturing of appliances, application, and the actor/model, who has to sit in the makeup chair for an average of 2-3 hours to have it applied and that is only if there is a small number of prosthetic appliances being used. I have known of makeup times being up to 6 hours or even longer. There is a level of comfort both artist and talent have to be aware of when applying and maintaining. You must be very patient and be able to tolerate a lot during the long 12-14- hour shoot day onset that you are wearing them as they get hot, itchy, and sometimes very tight depending on what your rig is.

MM: What has been one of your favorite career moments thus far?
CM: There have been so many highlights throughout my twelve years in the industry – but one of the
most memorable is being part of the amazing make up department working on the Avatar sequels.
Witnessing the movie making legend James Cameron, a creative who has made some of my favorite
films that hugely influenced my career was quite amazing.

MM: Did you always know that the makeup industry was where you were meant to be? Or was there
ever any other career path on your horizon?
CM: I definitely always had a passion for being creative and I loved film. I knew I wanted to go in that
direction but at the time when finished high school there wasn’t a lot of information around. The
internet and google were in their infancy, career advisers at college kept directing me towards Fine Arts School but I knew there had to be something else. I loved character and creature design, so I went the digital route and studied 3D Animation. Visual effects and game design fascinated me, to this day it still blows my mind and if I had not gone in the direction I have, I would most likely be in that world. But it has all come together and helped me get to where I am. Design is in everything creative; we are constantly bringing characters to life and there is always a story behind the looks we are doing.

MM: Do you currently have a favorite brand of brushes? Why? Which brushes in particular?
CM: I have so many different brushes, probably too many in fact, but my favorite is the Bdellium SFX
range. The quality and design of the brushes is second to none – perfect for precision and fine detail
work for prosthetics, character or beauty makeup.
If I had to pick my MVP’s that I always grab for my standby bag they would be:
– 191 Precision Stippling
– 174 FX5
– 153 Capillary
– 128 Bent Liner

MM: Where do you pull inspo from when it comes to creating a makeup/creature design?
CM: As cliche as it sounds inspiration is everywhere in the world around us, but two of the biggest for
me would have to be both nature and culture. Nature has created some of the most incredible things
you will ever see, the colours, textures and creatures all have a purpose and their own story on how it
has evolved and functions. I have an archive of books on animals, insects, marine life, plants and human anatomy that I’ll often reference when working on a makeup. Culture is another huge inspiration for me There are so many beautiful cultures in the world each with their own unique art, traditions, stories, myths and legends told throughout history.

MM: Do you have a favorite look you have created so far?
CM: I have helped makeup designers bring some unforgettable characters to life but my personal
favourite and one that holds a special place in my heart would have to be a look I designed very early on in my career. In 2009 I entered the Weta Workshop SFX Creature category at New Zealand Body Art Awards with a make up design that was my interpretation of the Balinese Witch ‘Rangda’ which endingup winning first place overall, best creature as well as the award for best emerging artist.

MM: In the next year, I hope to…
CM: Take time out to see more of New Zealand, in particular the South Island – before heading abroad to work, travel and immerse myself in other cultures.
MM: My dream vacation would be…
CM: I have so many, but Driving Route 66 with a stop in Monument Valley is high up there on my
bucket list!
MM: Where do you see yourself 5 years from now?
CM: Exploring the world and getting to experience all my dream vacations.